We Are St. Alban’s

Our mission is to be a vibrant,  Christ-centered church, witnessing God’s love for all people, through worship, education, stewardship, outreach and pastoral care.

We believe that God calls us to live our lives as Christians, not just as individuals, but as a community — part of the larger body of Christ. We are called to witness God’s love for people everywhere, nearby and afar.

We believe God does not want us ever to be comfortable and complacent, but rather to be vibrant … “vigorous, lively, and vital.”

The St. Alban’s Vestry are a dedicated group of elected volunteers who lead the parish and help to define, articulate, and sustain the St. Alban’s mission.

The basic responsibilities of the vestry are to help define and articulate the mission of the congregation; to support the church’s mission by word and deed, to select the rector, to ensure effective organization and planning, and to manage resources and finances.

Learn More and Meet the Vestry

A peaceful corner of the church property has been set aside and consecrated for the purpose of receiving the cremains of St. Alban’s congregants, families and friends.

The St. Alban’s Vestry has approved this Emergency Action Plan to address emergencies that we can reasonably expect in our neighborhood and here at church, such as fires, tornadoes, floods, and others.  This plan will help us prepare before emergencies strike, and help St. Alban’s to be a shelter and refuge for our neighbors in case a disaster should affect the local community.

In addition, the plan includes contact phone numbers for the various vendors who maintain our physical plant systems. 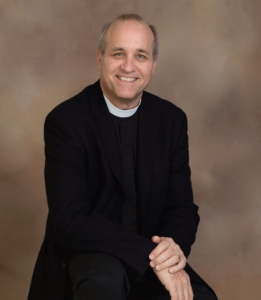 Father Jeff first joined St. Alban’s in 2005 as Assistant Rector, and since September 2013 has served as Rector.

Father Jeff has served at St. Alban’s since 2005, first as Assistant Rector, then Associate Rector, followed by Priest-in-Charge and now, since September 2013, as Rector.

Ordained ministry is Fr. Jeff’s third career. He served in the US Army Intelligence and Security Command for eight years as a Russian linguist in West Germany in the 1980’s. After leaving the Army he worked for the next fifteen years in the corporate world as an IT specialist, programmer, system administrator and data center manager.

In 1998, Fr. Jeff was ordained to the permanent, or vocational, diaconate in his home parish of St. Stephen’s, Boise, in the Diocese of Idaho. His diaconal ministry was focused on establishing and leading his church’s participation at the local soup kitchen in Boise. After discerning a call to the priesthood, Fr. Jeff packed up his family and moved to northern Virginia in 2002 to attend Virginia Theological Seminary in Alexandria. After graduation from seminary Fr. Jeff was called to serve at St. Alban’s.

Fr. Jeff and his wife, Kate, have two adult children: Audrey and William. In his spare time Fr. Jeff likes tending the grounds of the rectory which Kate likes to call the “deer’s snack-bar.” 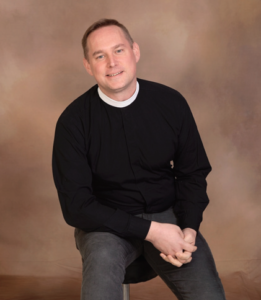 Father Paul grew up in Minnesota surrounded by Lutherans and lakes. He was first introduced to the beauty and grandeur of the Anglican tradition as a ten-year-old, in Hawaii, when his dad taught a Bible course in an Episcopal Church. His favorite childhood author, Madeleine L’Engle, was a devout Episcopalian, and as a teenager he read many of her religious-themed journals and memoirs. From an early age, he was drawn to the music and liturgy of the church.

Fr. Paul is an alumnus of St. Olaf College in Northfield, MN, where he earned a Bachelor’s degree in 1997. And yes, he did sing in one of the choirs. He spent much of his twenties living in San Francisco, where he worked as a bartender and freelance copy editor. In his thirties, he exchanged the West Coast for the East, and lived in Vermont for half a decade.

Fr. Paul’s spiritual quest led him to St. Michael’s Episcopal Church in 2009, in Brattleboro, VT, where he quickly joined the choir and began serving in various other lay ministries — and began to grow deeply in Christian faith and Anglican identity. It was at St. Michael’s that he began to actively discern a call to ordained ministry.

The Diocese of Vermont admitted him as a Postulant for Holy Orders in 2014, and Fr. Paul relocated soon thereafter to begin theological formation at Virginia Theological Seminary in Alexandria, Virginia. He gained a great deal of liturgical knowledge and invaluable experience as a Seminarian at St. Paul’s Church, K Street, in Washington, DC from 2015 through 2017. He received his Master of Divinity from Virginia Theological Seminary in May of 2017.

Fr. Paul was ordained to the transitional diaconate in the Diocese of Vermont at St. Michael’s Church, Brattleboro, Vermont on January 7, 2017. He was ordained as a Priest eight months later at St. Alban’s Church, Annandale, Virginia, on September 8, 2018. The Right Reverend Thomas Ely, tenth Bishop of Vermont, conferred both ordinations by the laying-on-of-hands and presided at both liturgies.

Paul and his husband, Gerardo, live in Annandale, Virginia. They were married at St. Paul’s, K Street in Washington, DC, in Eastertide of 2017. Together, they enjoy cooking and (perhaps especially) baking, and travel whenever time and resources permit them to do so. 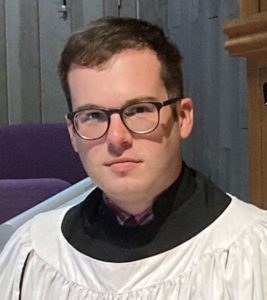 Adam Detzner joined St. Alban’s as Minister of Music and Organist in August 2021.

Adam Detzner joined St. Alban’s as Minister of Music and Organist in August 2021. He is a graduate of the Eastman School of Music (M.M. in Organ Performance and Literature) and Stanford University (B.A. in Music). His teachers include David Higgs, Robert Huw Morgan, and Christian Lane (organ) and Elaine Thornburgh (harpsichord). He is thrilled to join the St. Alban’s family, and he is excited by the parish’s love of music.

Adam’s passion for church music began between college and graduate school, when he served as the inaugural recipient of the Association of Anglican Musicians Gerre Hancock Internship, working as Organ Scholar at Trinity Church, Copley Square, in Boston. While there he was involved in all aspects of the parish’s renowned music program, including working with the boy and girl choristers enrolled in its large Royal School of Church Music (RSCM) program. In his most recent position, at Christ Church (Episcopal) in Columbia, MD, Adam founded and built his own thriving RSCM program, which featured no-cost snacks and dinners as a form of community outreach. Adam is passionate about working with children and believes that musical education in a liturgical context is a powerful way to build lifelong disciples.

A dedicated performer, Adam has played for national conventions of the American Guild of Organists (AGO) and the Association of Anglican Musicians (AAM). Live recordings of his playing have been featured on the nationally syndicated Minnesota Public Radio program Pipedreams. Upcoming recital engagements include a performance at the Cathedral of St. Philip (Episcopal) in Atlanta. In June of 2022, Adam will compete in the International Schnitger Organ Competition in Alkmaar, in the Netherlands. He is the only American admitted to compete this cycle and will be able to play a number of important historical instruments. (Coincidentally, Alkmaar is the birthplace of John Leek, who built the organ at St. Alban’s!)

Adam lives in Silver Spring, not far from where he was raised. His partner Karl Robson is also an organist and church musician, serving as Director of Music Ministries at St. John’s Episcopal Church, Norwood Parish, in Chevy Chase. He and Karl have frequently collaborated for special worship services and are excited to do so with the choirs of St. Alban’s and St. John’s. In his spare time, Adam enjoys watching TV, listening to classical music on vinyl, and walking and running. He is also an avid crossword puzzle solver, with a 13:45 minute average for the New York Times Saturday puzzle. 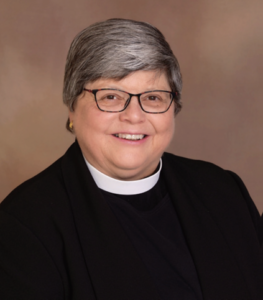 Deacon Theresa was first appointed to St. Alban’s by the Bishop of Virginia after being ordained in 2016.

Deacon Theresa began her time at St. Alban’s in January 2015 while she was attending The Deacons’ School of the Diocese of Southern Virginia and the Diocese of Virginia. After her ordination as a Vocational Deaconal, the bishop assigned Deacon Theresa to St. Alban’s. Deacon Theresa works with members of the Outreach Committee to support St. Alban’s partnership with Belvedere Elementary School which includes providing weekend food to students identified by the school as needing assistance. She also supports other ministries, including Sleepy Hollow Nursing Home, Samaritan Ministry, and the Caregivers’ Group. Deacon Theresa serves as the chaplain for The Deacons’ School and on the Diocesan Committee on the Diaconate and the Race and Reconciliation Committee.

A Northern Virginian since 1983, Deacon Theresa was received into the Episcopal Church in 1987 and was an active lay leader at Grace Church, Alexandria. She  is employed by the National Collaborative for Health Equity where she directs the day-to-day operations of a leadership program funded by The Robert Wood Johnson Foundation. Her adult son and daughter-in-law live in Tampa, FL. 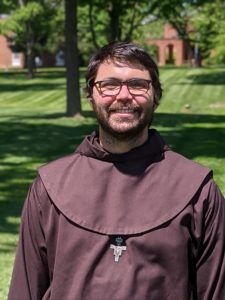 A native of Cuba and student at Virginia Theological Seminary, Luis is serving as seminarian at St. Alban’s this year.

Born and raised in Cuba, Luis entered religious life (in the Roman Catholic Church) after completing high school. In his twenties, he finished his studies in philosophy and education in the Dominican Republic, where he served among marginalized communities in both rural and urban contexts.

As his faith continued to grow, he found in the Anglican tradition a place where he could better serve God. After he was received in The Episcopal Church, he served as Youth Minister of Epiphany Cathedral and other Diocesan roles in the Diocese of the Dominican Republic.

He moved to the US almost five years ago, spending his first year as Children and Youth Coordinator at St John’s Episcopal Church in Grand Haven, MI, and supporting the foundation of the first Latino community in the Diocese of Western Michigan. Later, he moved to New York and served in St Bartholomew’s Church, White Plains, as Pastoral Care Coordinator and Latino developer. There, he also helped to plant a new vibrant Latino community in this church. He is blessed to be part of the team of facilitators of Academia Ecuménica de Liderazgo, the Council of Advice of Latino Ministries, and other church-wide initiatives.

A member of the Community of Francis and Clare, a Christian community in TEC, he strives to follow Jesus in Franciscan minority. He works, as best as he’s able, to answer the call of Jesus in the marginalized, the forgotten and the voiceless, promoting universal fraternity, justice, peace and harmony with the entire creation.

Slate of Nominees for XIV Bishop of Virginia Announced

Caroline Robinson in Concert on April 3

Find Peace in a Chaotic Time

The Samaritan Ministry Volunteer Spotlight Shines On Our Own Nancy Calvert

Want to be an Acolyte?  Now is Your Chance!